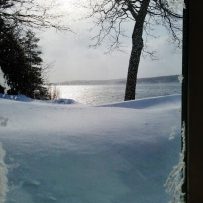 Our big February blizzard started on Saturday afternoon, the 11th, went through the night and until of the afternoon of the 12th. Mary Ellen was working on a painting job at Seanook which she had to pursue each day in order to get the requisite number of coats dry before the next guests. So before 9:00 am on Sunday she put on her gaiters, hooded coat, and gloves, and headed out with shovel in hand to dig her way across the street. Right away she was confronted with a large drift on the steps of the shop. Then it was a matter of shoveling enough to decrease the snow depth from hip depth to knee high in order to wade through it, all the while fighting 45 mph gale-driven snow. It took her about 15 minutes to get across the street. When she arrived at Seanook, the drift against the door was as high as the handle. For the duration of the morning there were no views, just a complete white-out as if plastered to every window.

Two hours later the storm was starting to ebb.  When he went out with the snowblower, Ron found the path completely blown in again, and the snow was again nearly up to the handle of the entry to Seanook.

By 3:00 pm the sun was out. Our total snow accumulation was at least 31 inches as measured at the golf course.  It was an exciting storm!

We had the next day for a bit of catch-up before receiving another 4 – 5 inches that night, hence the latter photos of the snow glued to trees.

Click the “read more”  button and turn on your sound to enjoy the video.  <iframe width=”560″ height=”315″ src=”https://www.youtube.com/embed/cBN1w_chM-Y” frameborder=”0″ allowfullscreen></iframe>

Visit us at our Studio, 70 Paradise Point Road!