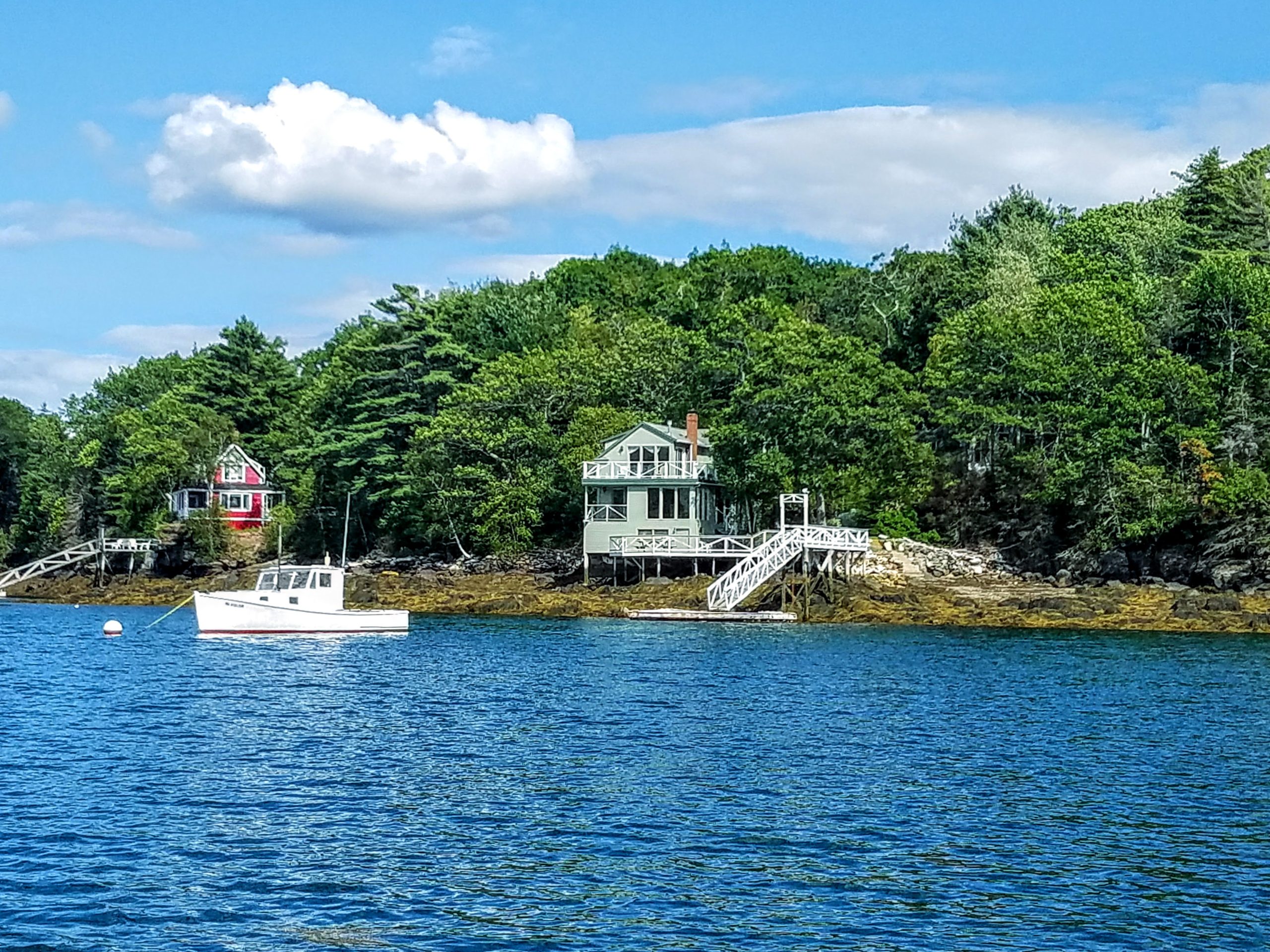 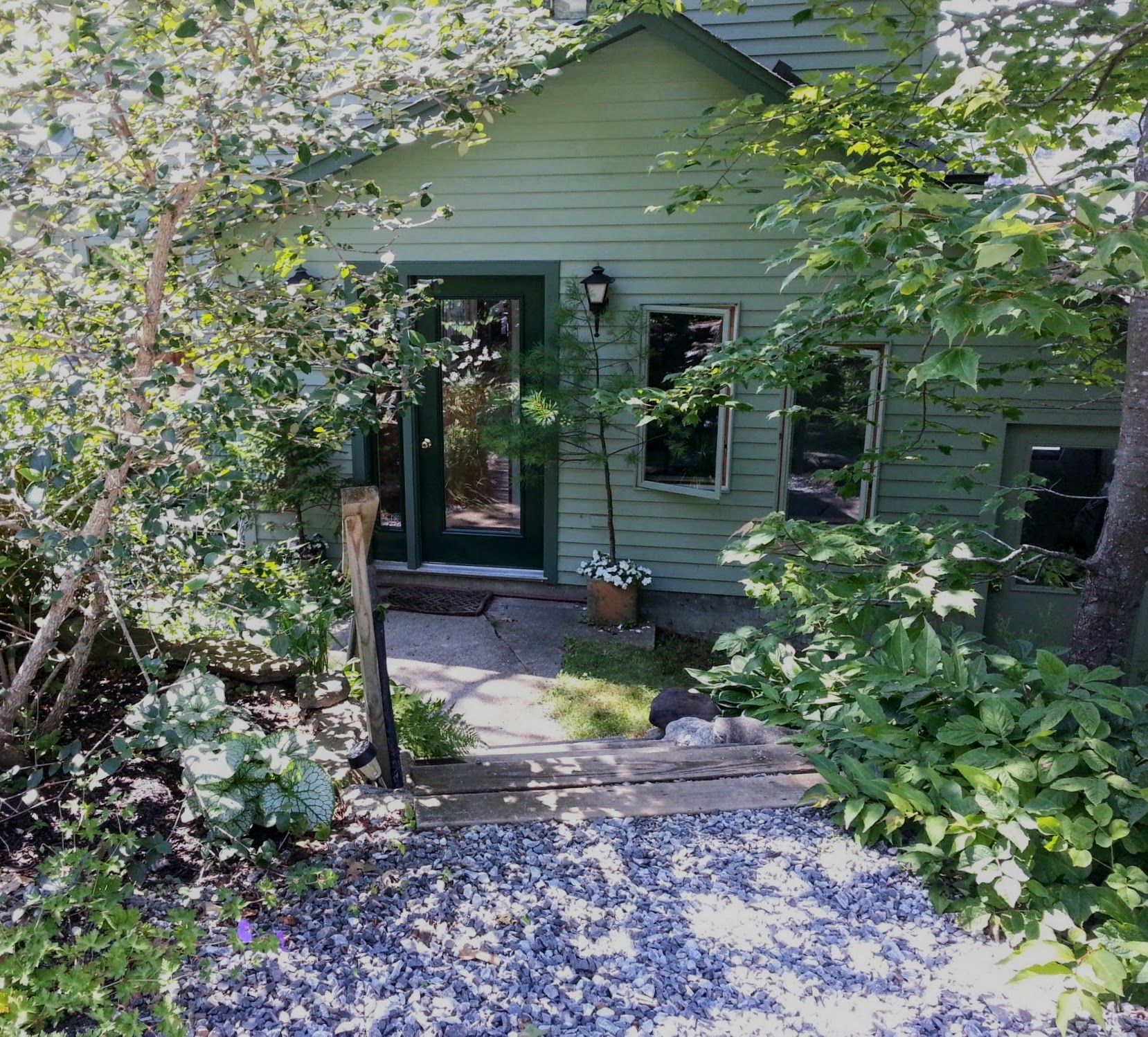 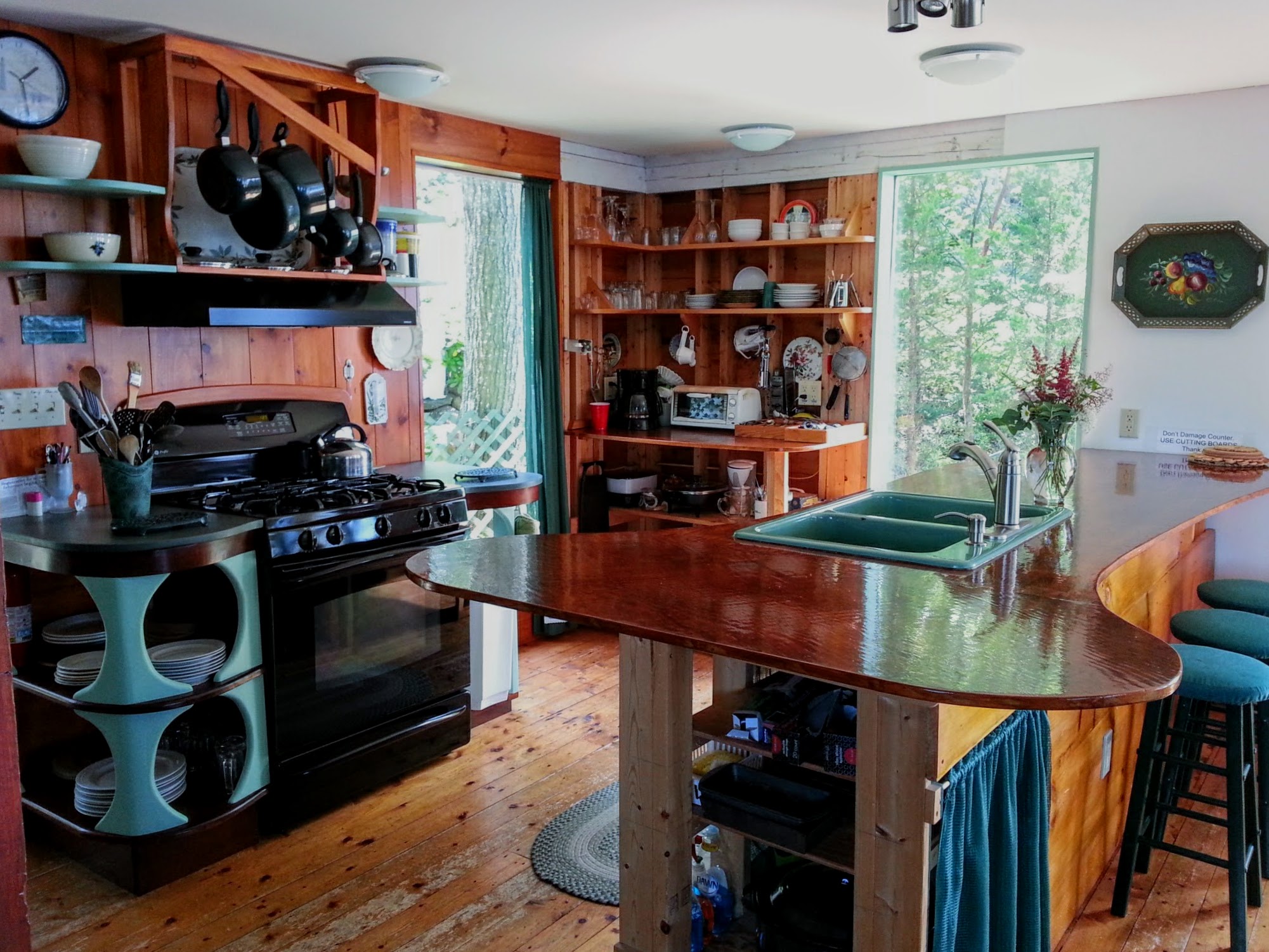 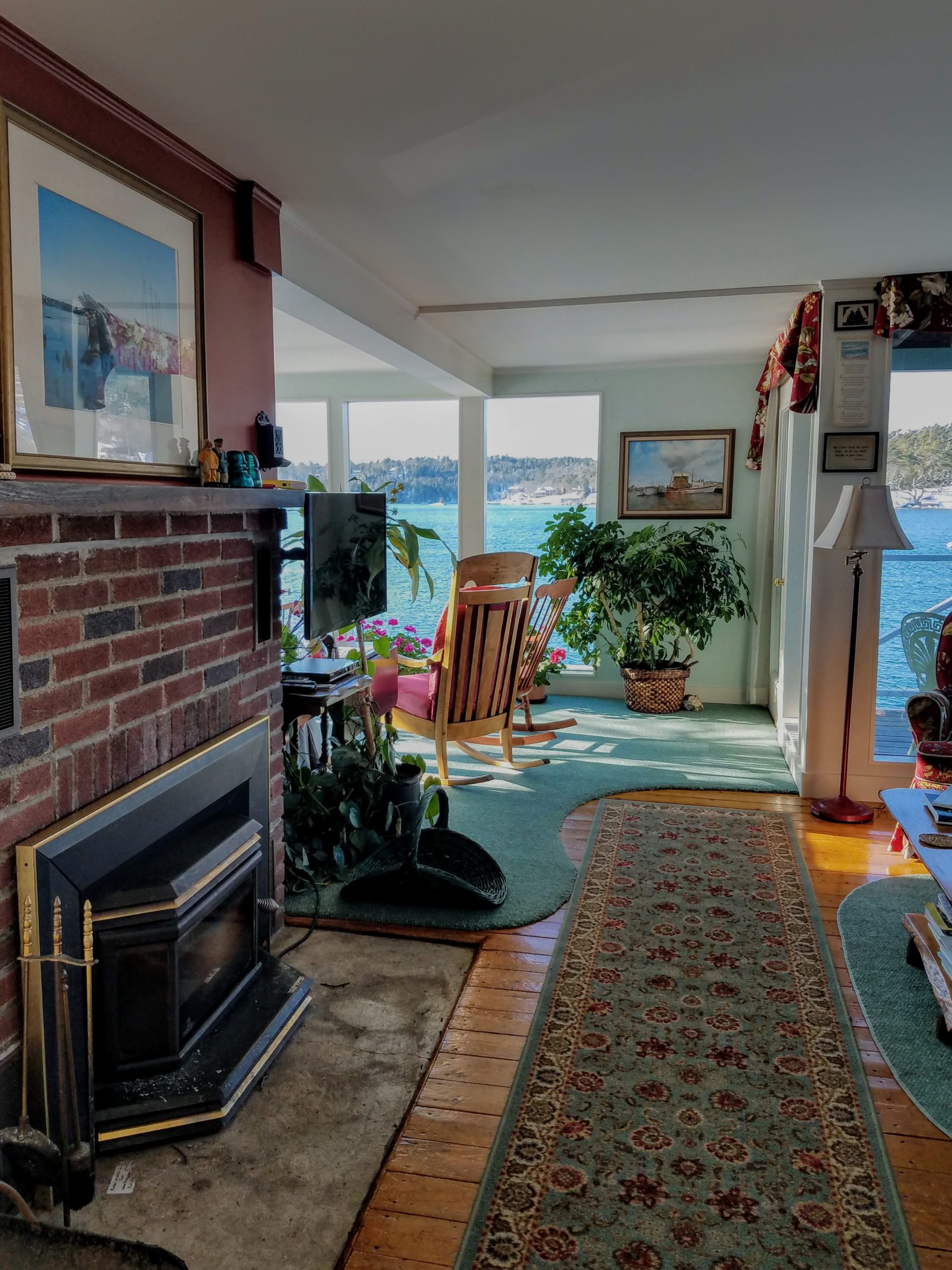 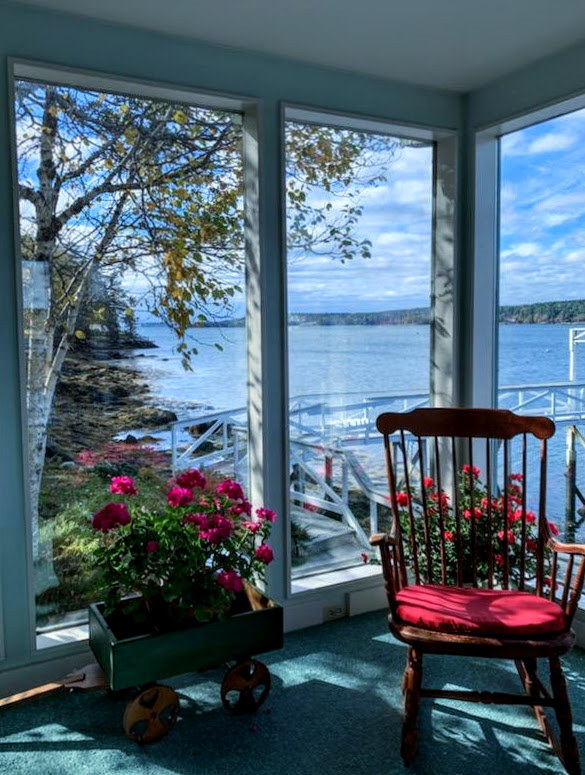 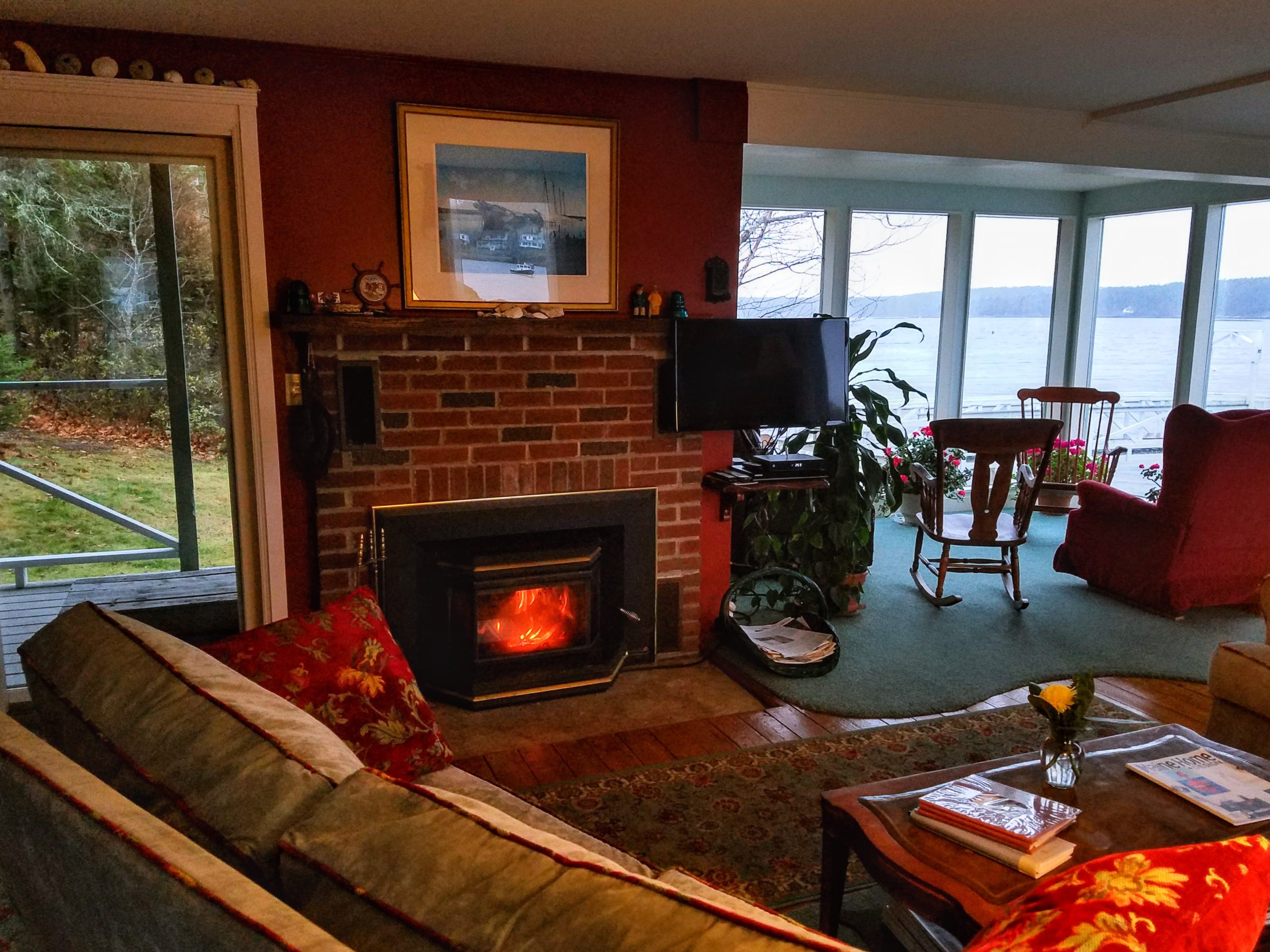 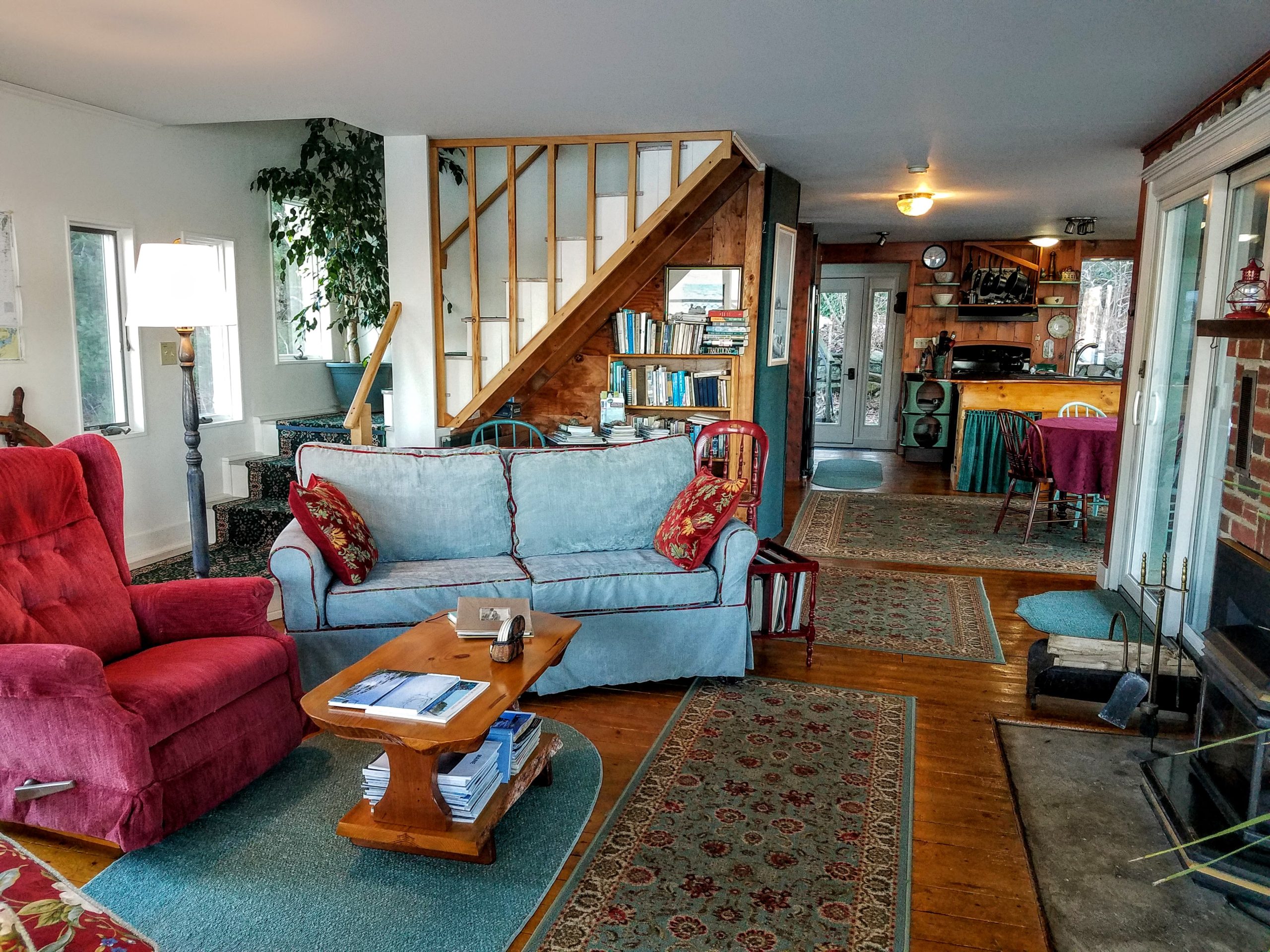 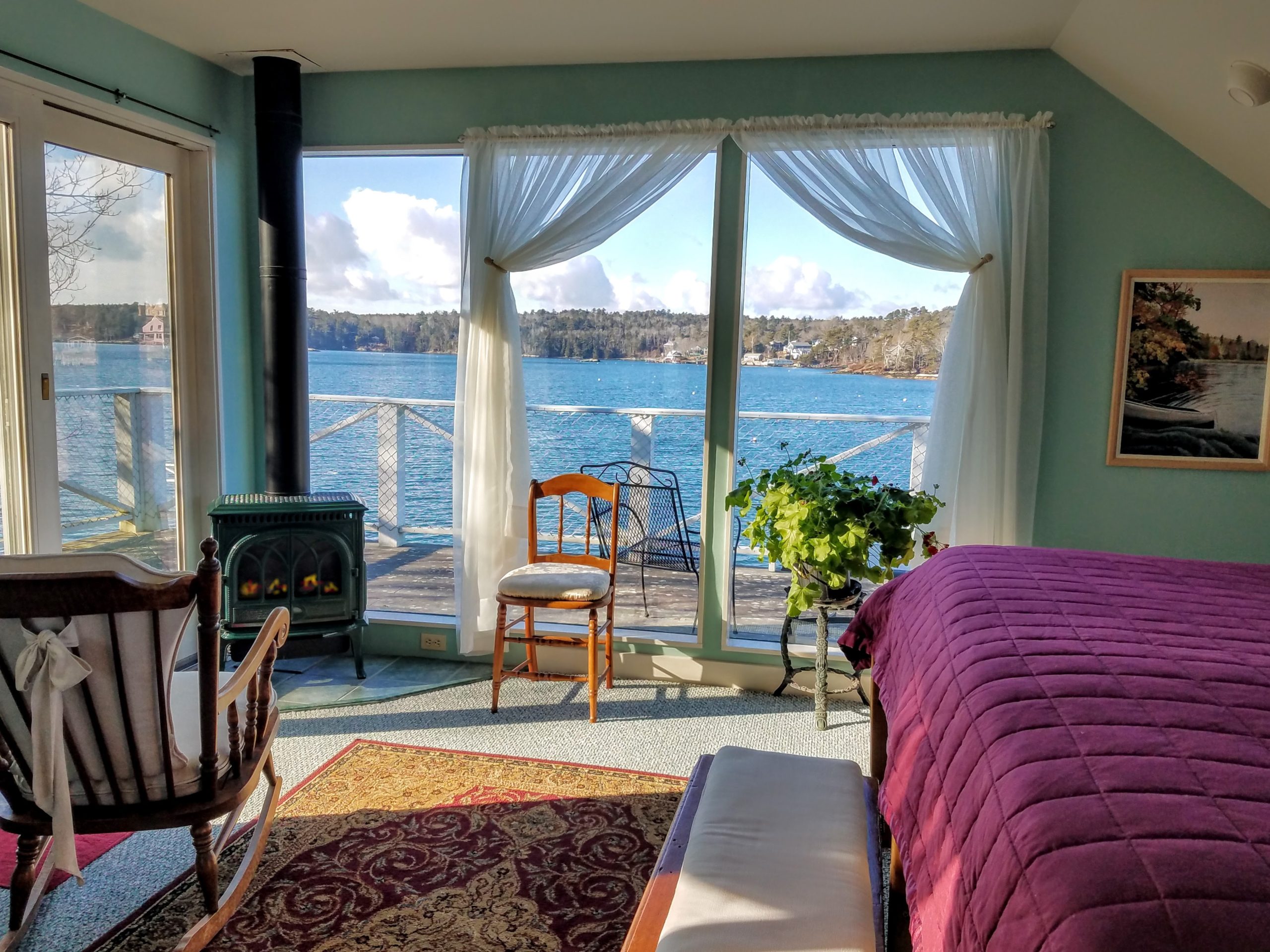 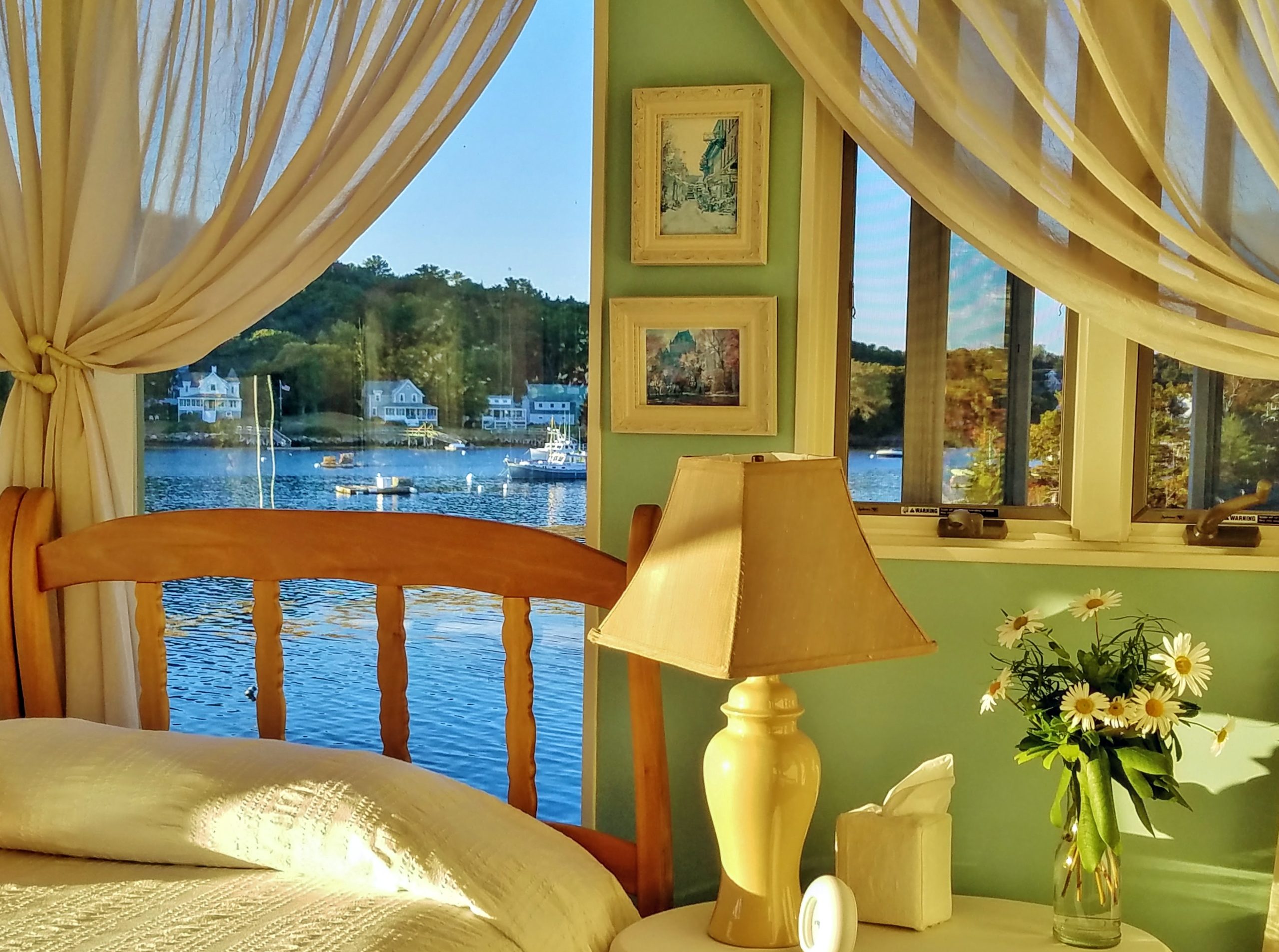 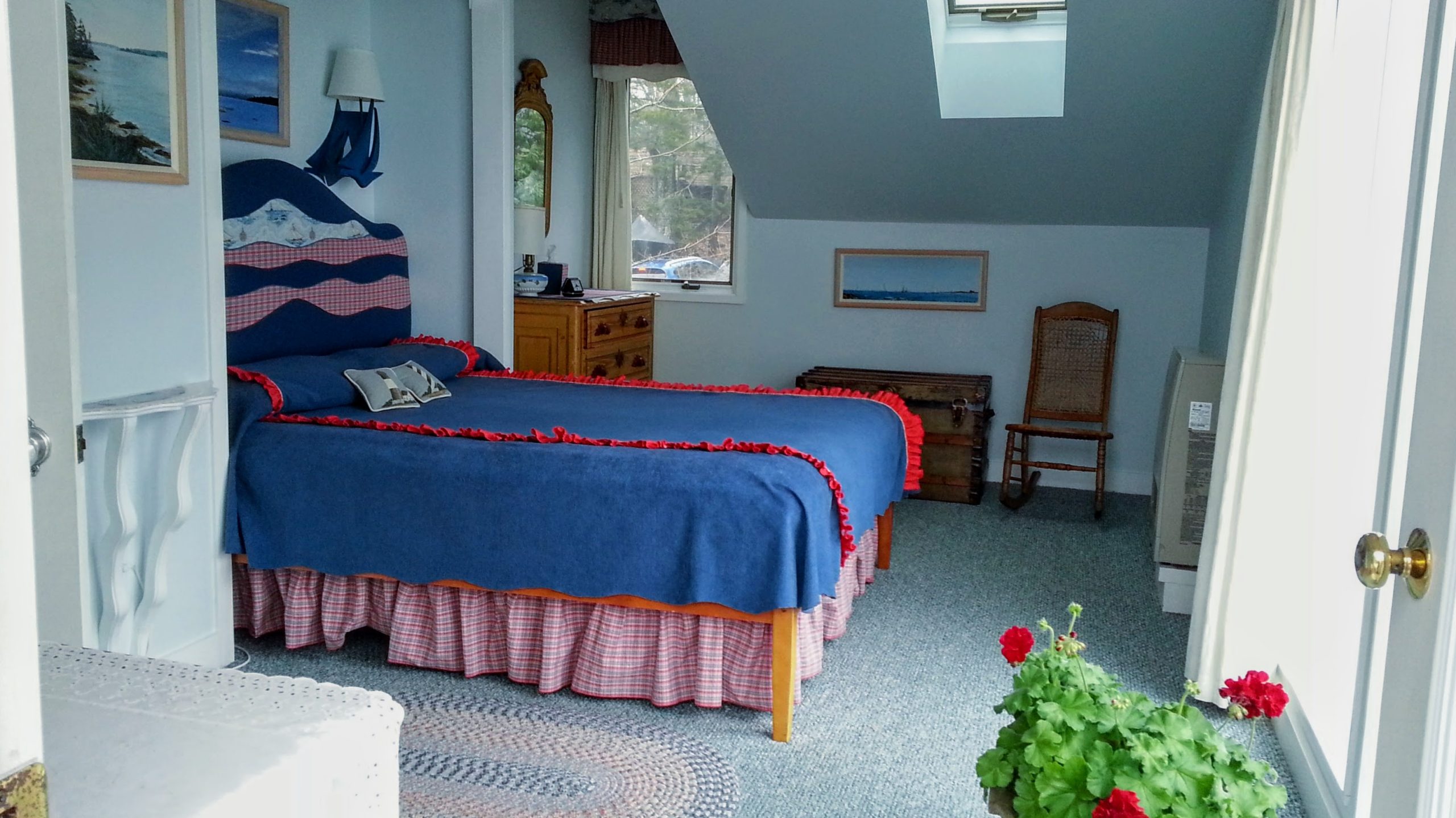 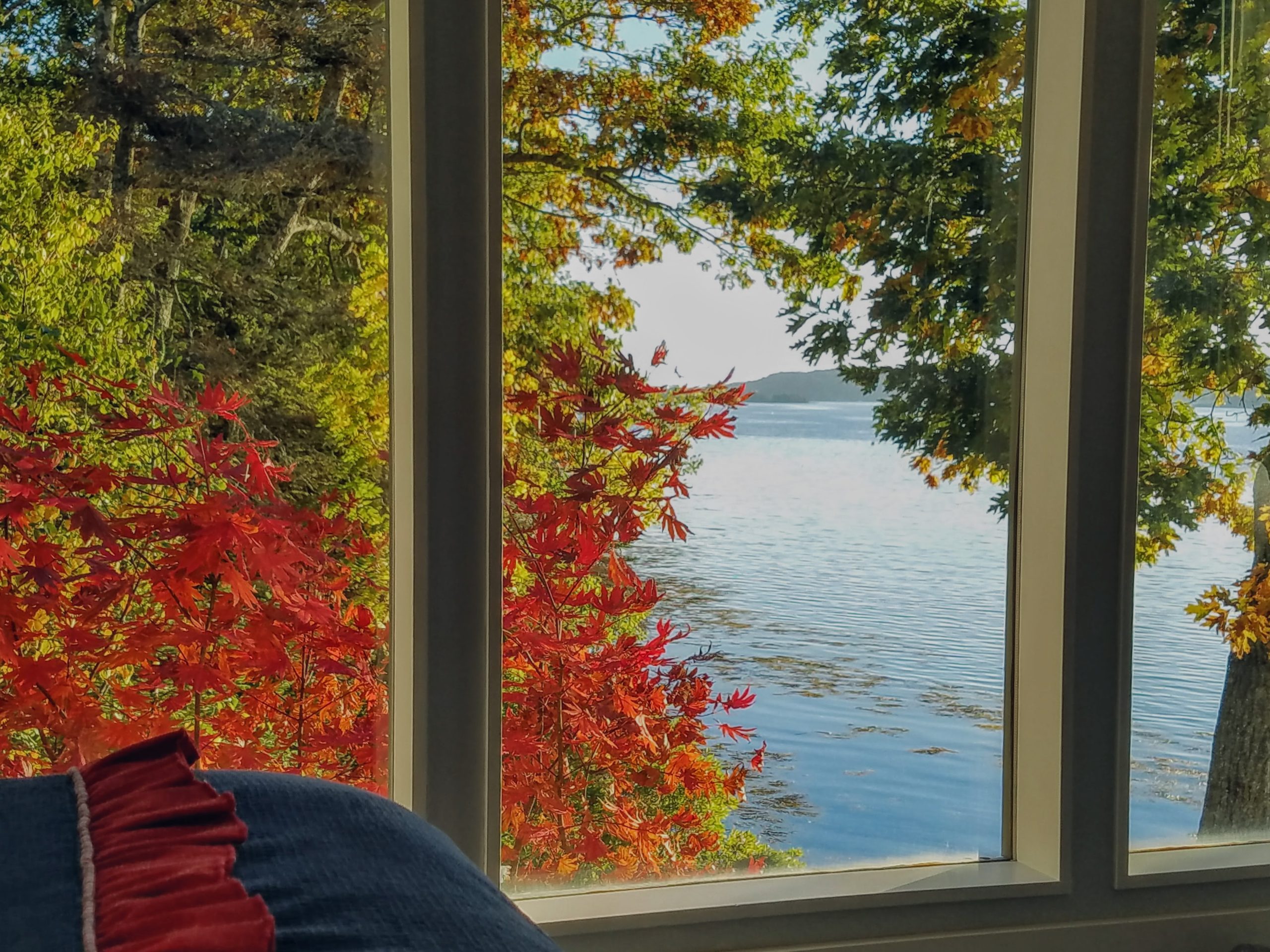 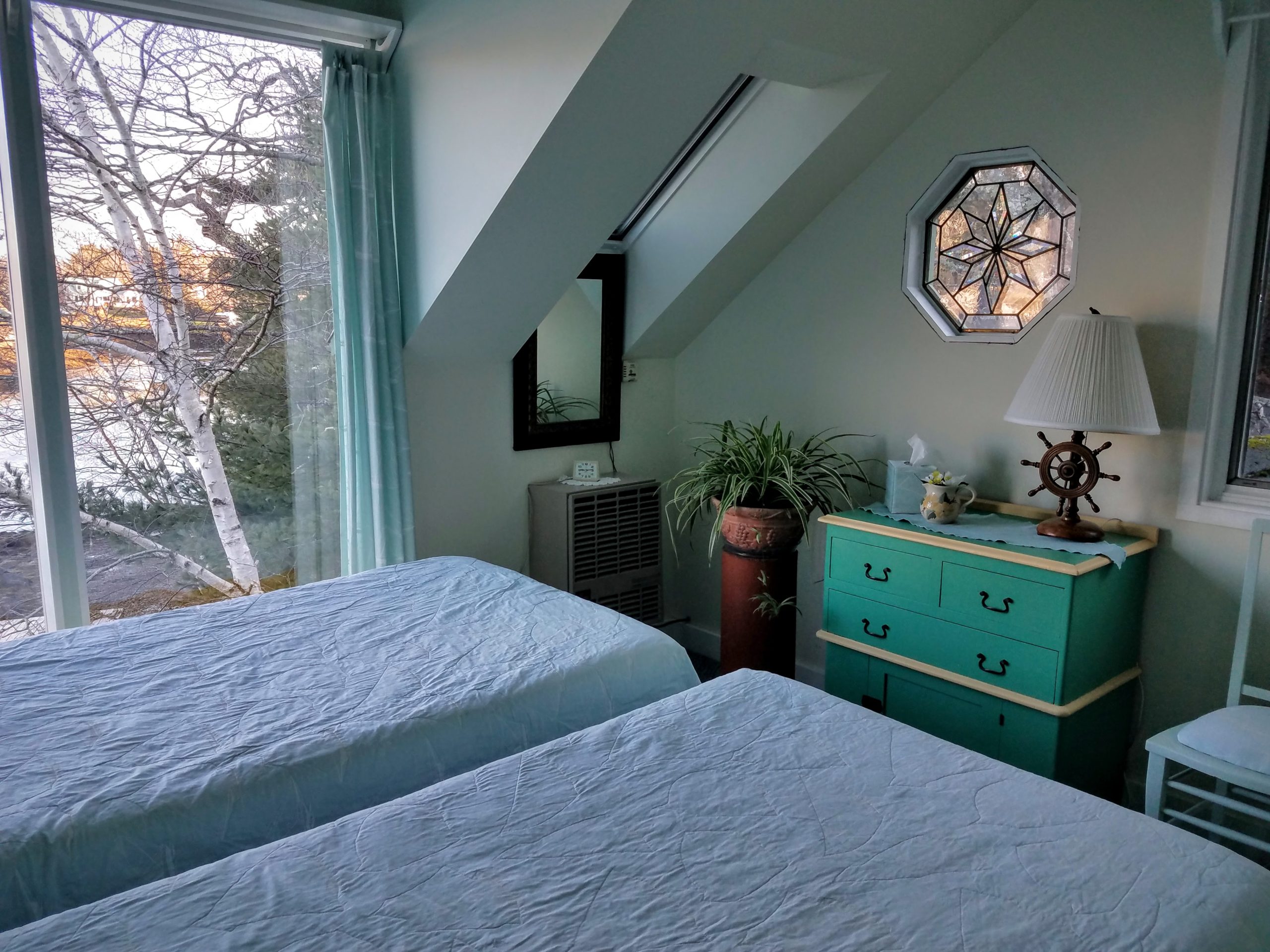 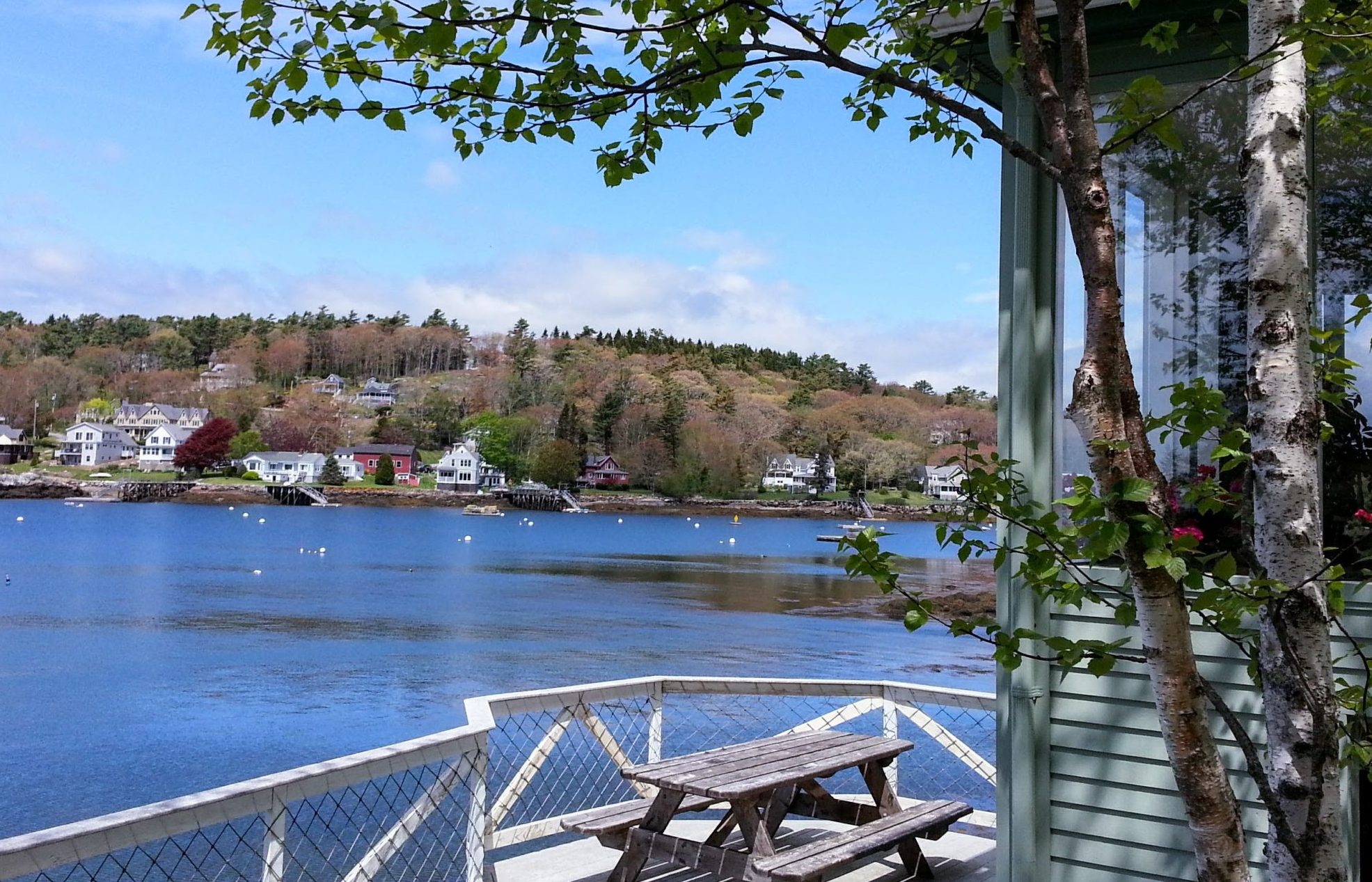 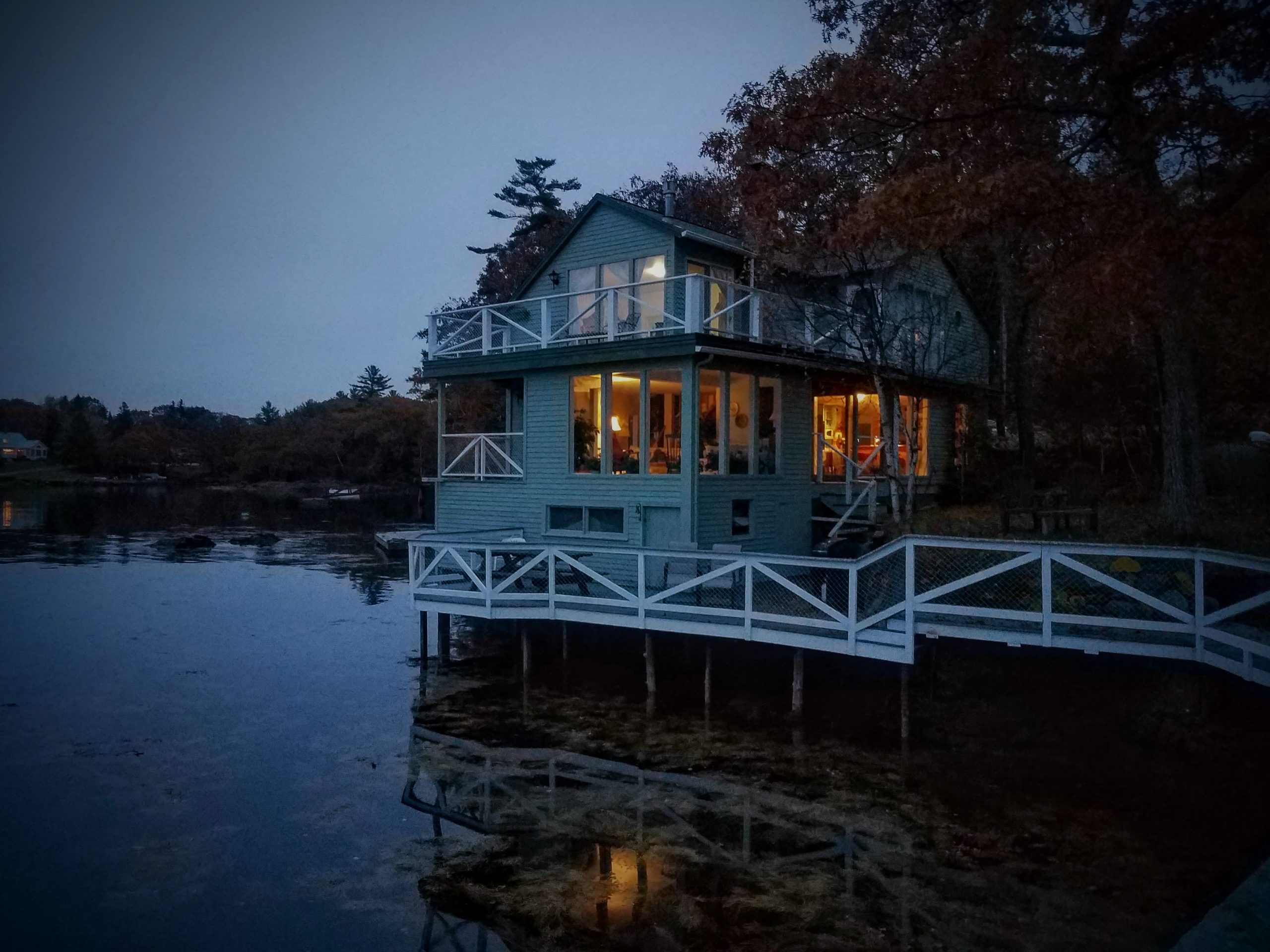 SEANOOK sleeps a maximum of 6 guests; you will find it to be an ideal place for a family vacation or even a small retreat.  Yet the space is delightfully comfortable for two people.  In Summer enjoy this peaceful spot with its dock and four decks as a weekly rental, Saturday to Saturday.  In all other seasons come for a minimum two-night stay, or choose it for up to a month’s cozy cabin sojourn. 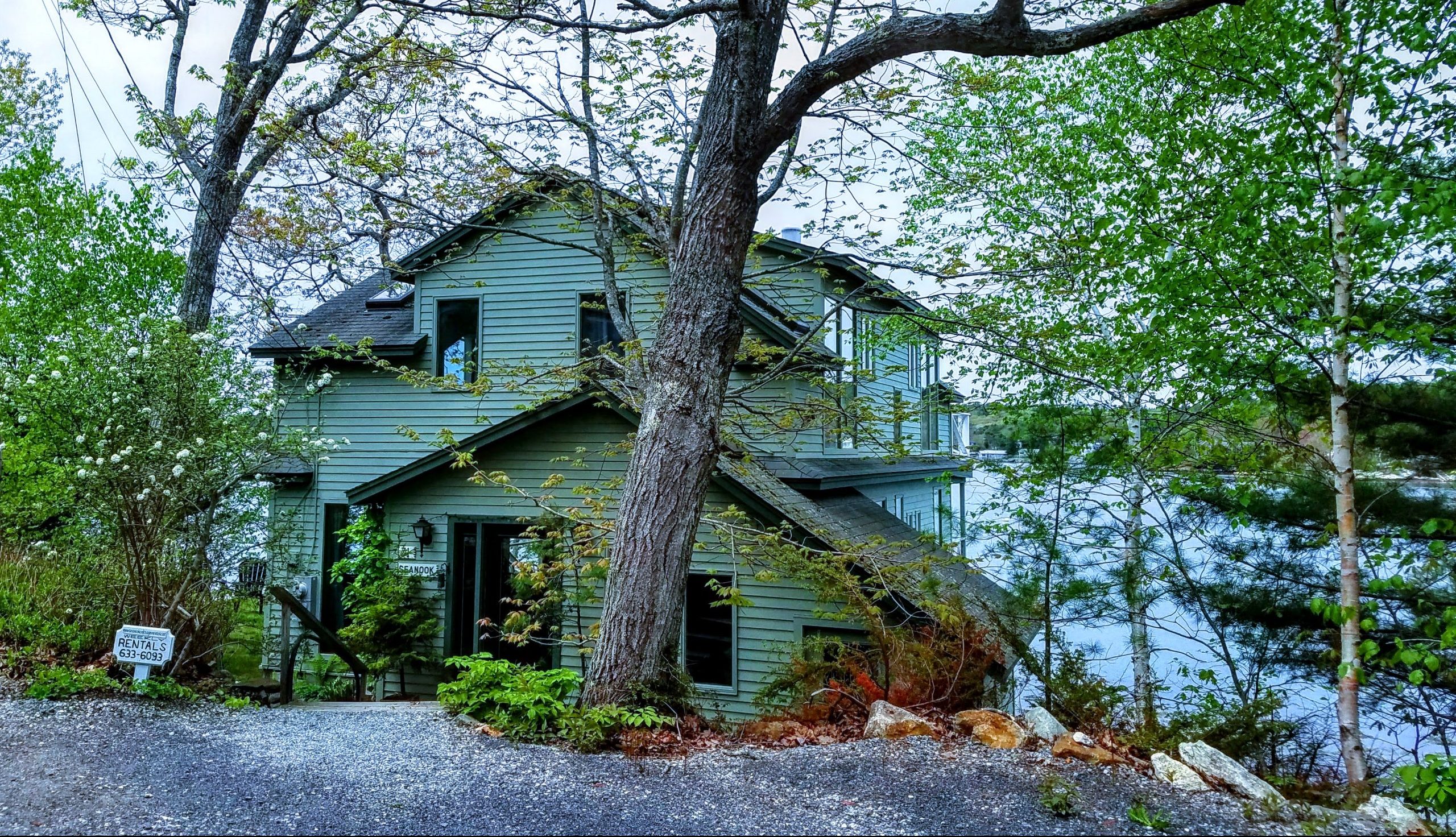 Seanook has a unique vantage point in East Boothbay grandfathered on the shore next to its own rocky point.  Seanook sits on the beach; the tide comes in under and around it. Staying here is like being on a boat except it doesn’t rock.  Four decks and floor-to-ceiling windows unfold water views in three directions, including a long vista to the mouth of Linekin Bay where it joins the open Atlantic sea.  From the dock in summer see spectacular sunsets across the water as you soak up soothing salt air, or in winter bask in the glow of the fireplace stove while you watch through the windows wind-whipped snow whirling across the waves.   On a rainy night, the pitter-pat on the roof will lull you to sleep. Wake up to the call of seabirds and the sloshing of little waves.

If immersing yourself in the relaxation of our spot doesn’t float your boat, you can venture out to discover woods and coastal activities in Boothbay and nearby Boothbay Harbor. Live theater, museums, artist studios, gourmet seafood restaurants, antiquing, boating excursions, fishing or kayaking on the ocean or a lake, or hiking the lush Maine woods are some of the activities to be found in this area.  See “About Boothbay” for more things to do.

To find Seanook on the map below you can actually zoom in on the “Satellite” version to locate the “dog-leg” dock; Seanook is immediately next to that. Seanook, Paradise Cottage, and Paradise Studio (our shop/studio) appear in a straight line from West to East.

History:  Seanook was built as a bungalow shortly after 1900 by John Seavey, then-owner of the East Boothbay General Store.  This enterprising shopkeeper used it as an annex from which to sell snacks, bait, and fuel to lobstermen on the bay.  His dock extended straight out from the lower deck where he gathered the rocks to secure his pilings.  An 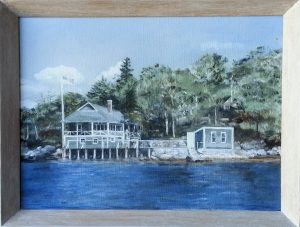 opening underneath allowed small boats to be stowed below the bungalow. Gas, that Mr. Seavey sold to lobstermen, was stored in a shed just south and down a few steps off the front lawn.  (Photo of painting, right.  When you enter the cottage you will see this painting showing the bungalow as it was when Mary Ellen’s parents owned it.)

The breakwater on our north beach pre-dates Mr. Seavey.  The previous owner of the land used it, to haul up and store his boat for the winter. Obviously, ocean levels were not as high then because that wall is well under water now on a normal high tide.

Subsequent use of the cabin was for “people from away” who were escaping the summer heat in Massachusetts.

Mary Ellen’s parents bought the bungalow through realtor, Mr. Linekin, in 1947.  Her grandmother knew him because both their families were originally from Pittsfield, ME.  Mary Ellen’s father came up with the name “Seanook,” a nook by the sea.  Every summer he did an improvement project on the building. It was then a 5.5-hour drive for us to come from Natick, outside of Boston.  Starting the year she was 5 years old until she was 17, she spent three months every summer here.  She always knew this was where she wanted to be.

When Mary Ellen acquired the property in 1997, she contracted gradual renovations to winterize it and added the second floor, the sunroom (previously a partially enclosed porch), entry hall, and laundry room. After all the major work was done, she and Ron have been making subsequent improvements themselves.

The shoreline here is the quintessential authentic rocky coast of Maine.  Seanook is grandfathered to overhang the water; on a very high tide the ocean is magically near.  Any new construction lacks this intimate closeness.  For nature’s sights and sounds Seanook is unparalleled.  For relaxation it is sublime. Come experience this proximity to weather, wildlife, and water, now available year-round.

Seanook can be your escape cabin on Linekin Bay! Please, first check our Availability Calendar, and send your request now!

Leave a review
1Low (Based on 1 reviews)

My family of 5 - (3 teenagers) have been coming to Seanook for the past 9 summers! This we all look forward to every year. It is the simple things that combine to make big things. The location is perfect.  Linekin Bay sunsets Bay sunsets are breathtaking. Waking up in the morning to the sounds of the water all around is a treat. You can kayak, fish, and swim right off the dock. It is a peaceful place and has become our happy place. It will soon be yours too.Read More

Thank you so much for sharing your house!  The view is spectacular!  The wildflowers were a beautiful welcome.  We enjoyed everything about our stay.  Look forward to framing our notecard when we get home.  We about this beautiful place.  It will be tough to beat anywhere else!Read More

We just had to come back to Paradise and brought friends Deb & Amy from Portland Me, with us.  They fell in love as well. Enjoyed bird watching - saw young bald eagle, black guillemot, loons, eiders and others. &sunsets and many shooting stars.  I believe you'll be seeing us all again.  Thanks for sharing this beautiful paradise.Read More

We've just spent our 3rd weekend at Seanook, the second one in 2013.  Once again we thoroughly enjoyed our stay.  It now feels to us like we're "coming home" to Seanook.  Ron and Mary Ellen add so much experience.  The weather was a little non-cooperative this time, but despite the blustery winds and occasional rain, we had a lot of sunshine, stunning sunsets, and crisp, clear nights with amazing stars!  We were blown away by the number of flowers still in full bloom along with the vivid colors of fall foliage.  We love it here and we will be back.Read More

When I get out of the car from my three hour drive to Seanook from NH, it is truly like coming home.  There is everything here one needs for rest, peace, and true downtime.  Ron and Mary Ellen model hosts who have made every one of my stays rich, warm, memorable, and worth all the effort to get here.  By the end of 2013, I will have been here 5 times. Can't think of anywhere else I would rather be!Read More

Thank you for your hospitality.  We have felt very welcome and comfortable here and have tried to enjoy as many different vistas as possible!  This is a relaxing and tranquil venue which all can appreciate.  Excellent walks

** Dates are only a request as we can not promise those dates to be available. We do try our best to accomidate.